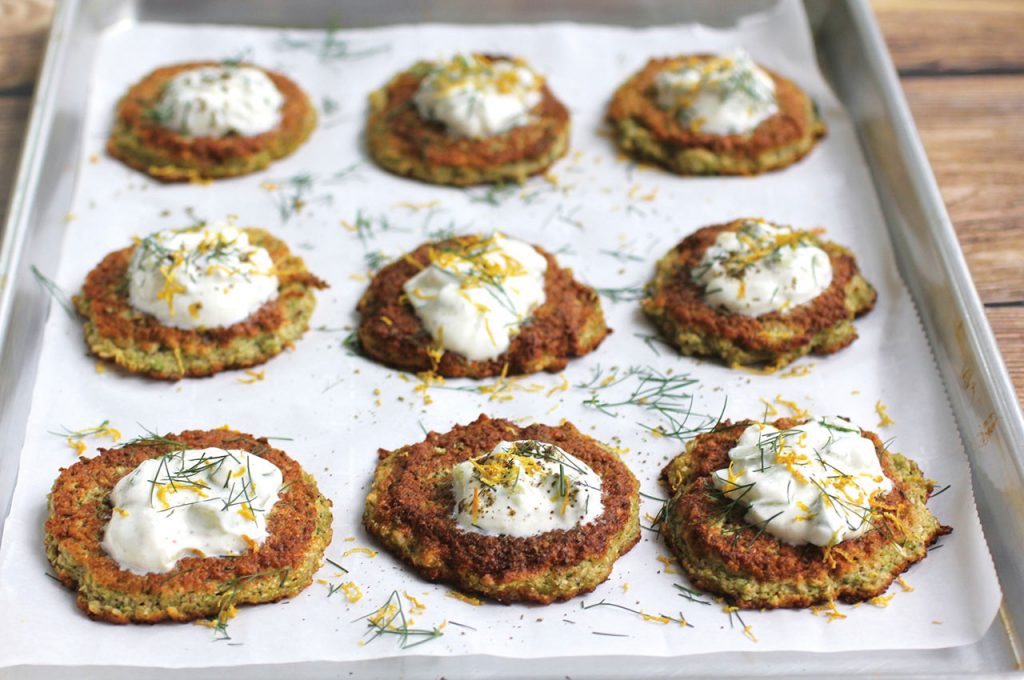 While it’s traditional to serve potato pancakes during the eight nights of Chanukah, this recipe includes more nutritious, raw broccoli and cauliflower as the base. Frying in oil is non-negotiable, but these cruciferous veggies absorb less than potatoes. Yogurt topping, mixed with Middle Eastern spices and citrus, keep the flavors bright and light. Yield: 10-12 latkes

Make the topping: Place all ingredients for the topping, except lemon zest, in a medium bowl and stir to combine. Adjust seasoning, adding more salt or black pepper, after it rests in the refrigerator. Put lemon zest aside and sprinkle on yogurt mixture when serving.

Make the latkes:
Pulse broccoli and cauliflower in food processor in 2 batches. Texture should be like cauliflower rice and you should have 3 cups, combined. Using a spatula, empty pulsed mixture into a large mixing bowl.

Do not rinse processor bowl.

Pulse garlic and onion until minced and empty into mixing bowl.

Using a large spoon, combine all ingredients in the mixing bowl and add flour. Mix until well combined. Mixture should feel dry. If not, add 1-2 more tablespoons of flour.

Heat a quarter cup oil in frying pan over medium/ high heat. Be sure your oil is hot.

Using a quarter cup dry measuring cup, scoop mixture into the frying pan. Flatten batter lightly and fry 3-4 into the pan. Do not overcrowd the pan. Allow latkes to brown for 3-4 minutes (try not to peek too often) and flip to fry the other side. Remove golden latkes to a paper towel lined sheet pan. Mix the batter once or twice before starting each batch and continue frying until all latkes are cooked.

Pat latkes gently with paper towels to remove excess oil. Serve piping hot with a dollop of herbed yogurt and a sprinkle of lemon zest.